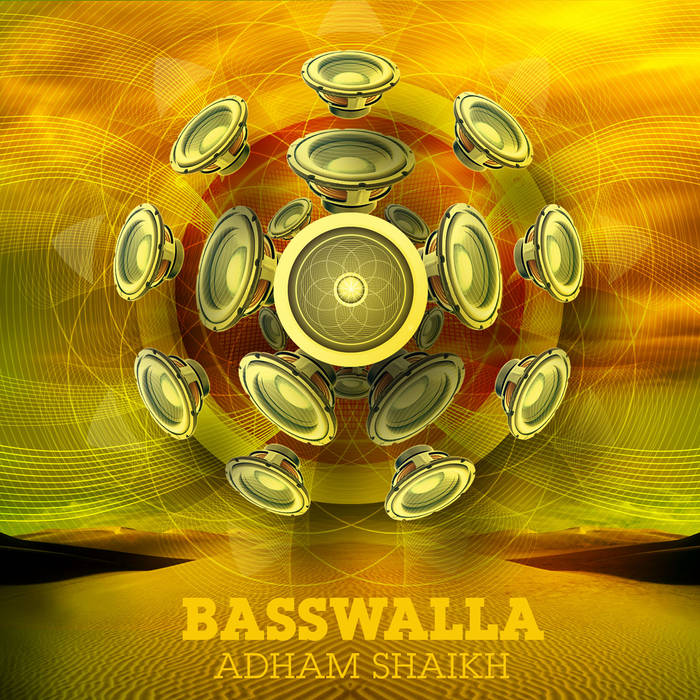 Ben I Sabbah Thanks, Adham, You're the Greatest! :-) Favorite track: Vibe Hunter (The Elders Dance Mix).

Reflecting his South Asian heritage and a fascination with electronic music that began in high school, Basswalla is the result of Canadian musician Adham Shaikh’s 25-year dedication to creating and performing original electronica and global fusion. In India, the suffix “-walla” indicates mastery in a particular discipline, and its use in the album title refers to Adham’s pioneering work in the “global bass” style -- characterized by electronic, bass-centric tracks featuring southern hemisphere sounds and an urban orientation. The title also references Adham’s return to his Indian roots in both method and material.

Following years of scoring soundtracks and producing other artists’ projects, Basswalla marks Adham’s first release of original material in five years. The album’s 10 cuts are split evenly between new tracks and updated versions of songs put out over the past 13 years. Wanting to offer more than a “greatest hits” collection, Adham took a fresh, improvisatory approach to reinterpreting the earlier songs. As he puts it, “Inspired to move beyond the notion of simply remixing, I discovered a place more akin to jazz or Indian classical music, allowing me to keep the scale and overall song structure intact while reimagining everything else.” Most of the mixing took place from October 2014 to March 2015 at Adham’s Sonic Turtle mobile recording studio, a converted tour bus parked outside his home in the forests of British Columbia.

With a couple of ambient electronic albums already under his belt, Adham’s musical path took an auspicious turn at the dawn of the 1990s, when he heeded his adopted father’s suggestion that he marry his love of synthesizers and samplers to the music of his father’s (Kashmir) and biological mother’s (India/Guyana) cultures. In search of exotic sounds to sample, he happened upon a recording by bansuri (Indian bamboo flute) master Hariprasad Chaurasia that “wrapped around my spine in a way that I’d never heard [before]” and reconnected him with his long-dormant South Asian roots. From that point on, sounds from India and other parts of the Global South became a regular feature of his music.

The opening and title track of Basswalla fuses global bass culture with devotional trance and captures the essence not just of the album, but of the artist as well. According to Adham, it “sits squarely at the intersection of prayer and dancefloor” and expresses his commitment to “living in service and dedication to craft” on a daily basis. From there, the majority of songs focus on a single instrumental or vocal timbre designed to center the listener’s attention. For instance, “Sabadub (Floating Soul Mix)” takes a track from his 2002 album Essence and strips instruments away until the bansuri part performed by the late Catherine Potter (a disciple of Hariprasad Chaurasia) takes center stage.

“Collective (Yogi Dub Mix)” is transformed from a piece driven by tabla, conga, and bongo percussion to an atmospheric dub track. “Vibe Hunter (The Elders Dance Mix)” replicates a haunting Armenian violin performance set against lively beats and keyboard work in order to commemorate the recent death of “Dancing Ken,” a fixture at British Columbia dance parties. As Adham explains, “I called Ken the ‘vibe hunter’ because his appearance meant that your event was the spot that night.”

Featuring two flamenco-sounding guitar loops that had lain dormant for four years, “Rumba Dub” finally took shape once Adham discovered samples of duduk (a clarinet-like Armenian double-reed woodwind) to pair with the guitars; the track’s power was confirmed for him when it inspired tears from audience members at its live debut. Finally, Adham’s “Deep South Mix” of the track “Crossroads” departs from the original (off 2010’s Universal Frequencies, Best Album winner at the BC Independent Music Awards) by showcasing Prakesh Sonntakke’s performance on mohan veena (a hybrid slide guitar from India) in its entirety and adding a performance on dholak (South Asian double-headed folk drum) by E Shankar.

With its even split of updated originals and brand new material, Basswalla affords Adham Shaikh and his fans the opportunity to simultaneously examine where he’s been thus far in his career, and what the future might hold for an artist well into the third decade of a storied, successful life in music. With a raft of nominations and awards for his studio work, and a bevy of devoted fans eager to hit the dancefloor whenever he drops the bass, it appears that things continue to move in the right direction for Adham. In the end, it’s the tension between the studio and live shows that propels his musical journey. “Its pushing a pea over a mountain with a chopstick. Every now and again you hope for a plateau and every now and again you wish you weren’t on a plateau and actually more in the drama of action.”

Created, mixed and produced by Adham Shaikh at Sonic Turtle Studio, somewhere near Slocan, BC