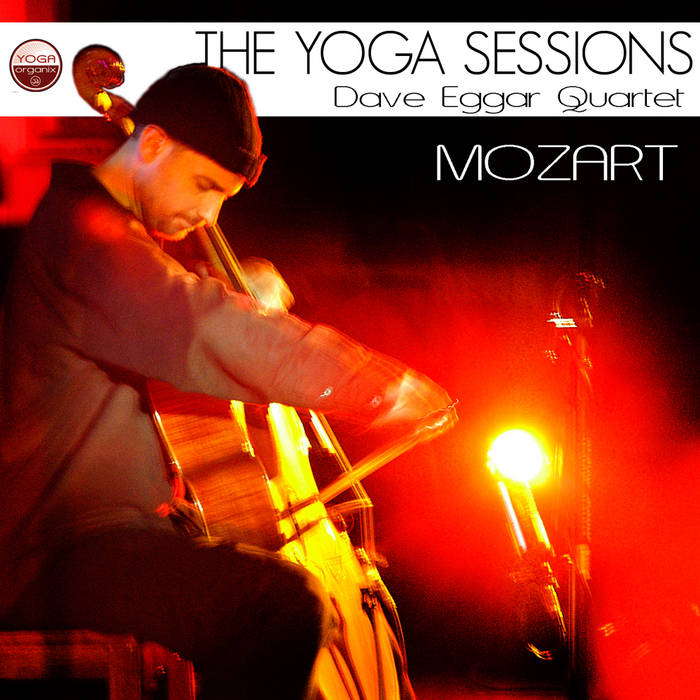 For cellist Dave Eggar, the parallels between Mozart and yoga reside in the sense of flow and grace we feel in our bodies. “Where Mozart intersects with yoga is in the depth of these pieces corresponding to the depths of your body on an energetic level," says Eggar.

Just as a master musician creates an effortless journey between each phrase of a piece of music, so the yogi is able to flow through sequential postures with natural poise. For Eggar, this idea was the foundation of his new album, The Yoga Sessions: Dave Eggar Quartet: MOZART (Yoga Organix/White Swan).

The idea of devoting Mozart to a yoga class happened nearly instantaneously between Eggar, Violinist Rachel Golub (aka Go-Ray) and producer David Schommer, founder of Yoga Organix and The Yoga Sessions series. “David and Rachel had already been deep at work on their record for his series,” Eggar remarks, “and I had been thinking about how to create music suited for the yoga experience. So I immediately went to work with Schommer and my longtime collaborator, violinist Rachel Golub, to figure out exactly how this music would move with the format of a yoga class. The salutations and flow parts were the most natural to pick pieces for,” he says. "One of the interesting things we found was that slowing down minuet movements elicited a very powerful emotional response. We started playing some pieces at half tempo, and it was beautiful. For the piece "Vishranti", for Savasana, and the album invocation, "Om", we were presented with an opportunity to create something original, based on Mozart's melodic structures."

Eggar and his quartet members—violinists Rachel Golub, Robin Zeh, and violist Ron Lawrence—may very well have found a new avenue for contemporary classical music to travel. While often presented in modern culture as a relaxation tool--as is yoga-- Eggar has always been interested in music as a “complete emotional experience.” He wants the record "to have the potential for relaxation, but also for something of a journey through the emotional landscape,” he points out.

As an artist, Eggar has also recorded three celebrated New Age albums: Serenity, Angelic Embrace, Left of Blue, and most recently, Kingston Morning, which features contributions by reggae legends Luciano and Sly and Robbie. Eggar's diversity extends through his studio work, recording with the likes of COLDPLAY, Amy Lee and Evanescence, and FLUX Quartet; as well as being featured on numerous original scores for film.

The emotion Eggar, Schommer and Golub hope to conjure on The Yoga Sessions is joy. Trudging through the struggles and depths of self-realization need not be a burden. As in music, Eggar believes yoga should be practiced as a celebration of body and spirit. “Music is very architectural for me,” he says; musical movements, just like life, are parts of a larger gesture, and that foundation needs to be solidly built.

With The Yoga Sessions' first foray into classical form, Eggar's practice becomes a celebration of unifying body and spirit.