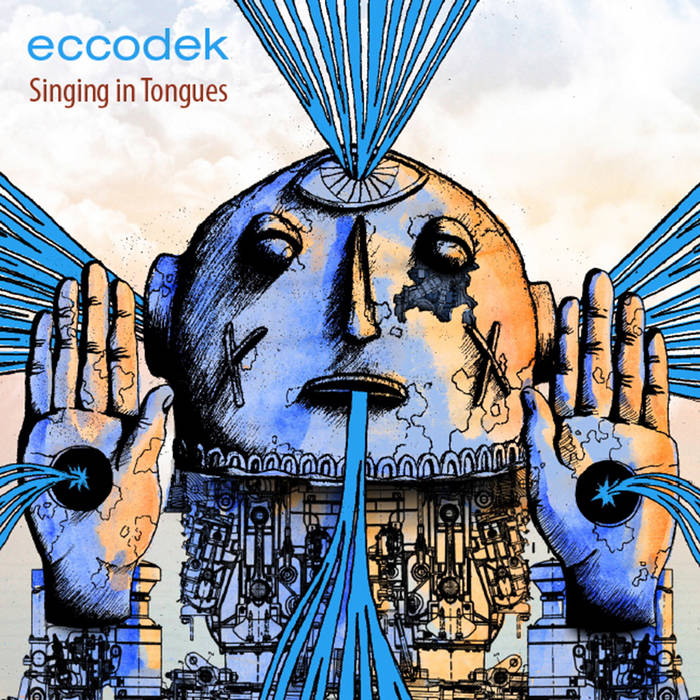 Singing in Tongues is the sixth release from Canadian global fusion combo, Eccodek, and it delivers their most potent blend of dub, tribalism, electronica and the exotic to date. Bathed in the sound of Africa, the place that inspired Eccodek’s future globalism over ten years ago, it is anchored by the vocal and instrumental double threat of Mali’s Jah Youssouf. These Eccodek/Youssouf collaborations are a visceral, poetic blend of African storytelling, deep bass, mile-high grooves, dubwise sensibilities and widescreen production.

The album picks up the trail from Eccodek’s Juno-nominated Shivaboom release and continues pushing the musical and geographic limit. Jah’s impassioned voice and furious ngoni playing sit at the heart of these songs, while Eccodek creator Andrew McPherson weaves together a musical travelogue with a stunning array of vocal and instrumental contributors. The songs are seeded in the creative soil of Bamako, Mali, teleport to Turkey’s seductive marketplaces, traverse the in-between worlds of the Middle East and South Asia, and land in the sweaty intoxication of Jamaica.

Perhaps the most interesting story behind Singing in Tongues is how this album came to be. Fellow Canadian producer and friend of Jah Youssouf, Lewis Melville, approached Andrew two years ago with a collection of songs by Jah Yossouf that had been loosely documented in a series of guerilla recording sessions. Largely improvised and jammed, the seeds of something greater could be felt in the material. Unable to develop the material beyond these early sessions, Melville suggested they be given the Eccodek treatment by Andrew, as Jah had already collaborated with Eccodek on their Juno-nominated (Canada’s Grammys) Shivaboom release. Intending, at first, to simply add to what was there with dubwise treatments and additional instrumentation, it became clear the material would blossom to its fullest potential if approached as a straight up collaboration. Similar to what British downtempo master Gaudi did with archival recordings of Pakistani qawwali singer Nusrat Fateh Ali Khan on Dub Qawwali, Eccodek’s reimagining of Jah Youssouf’s songs has produced a similar outcome. Singing in Tongues is firmly rooted in its singer’s homeland of Mali but, in Eccodek’s care, it travels well beyond its African borders.

“Love it all!” -Pathaan, BBC Radio

“Someone up north has been getting his dose of Fela.” -Huffington Post