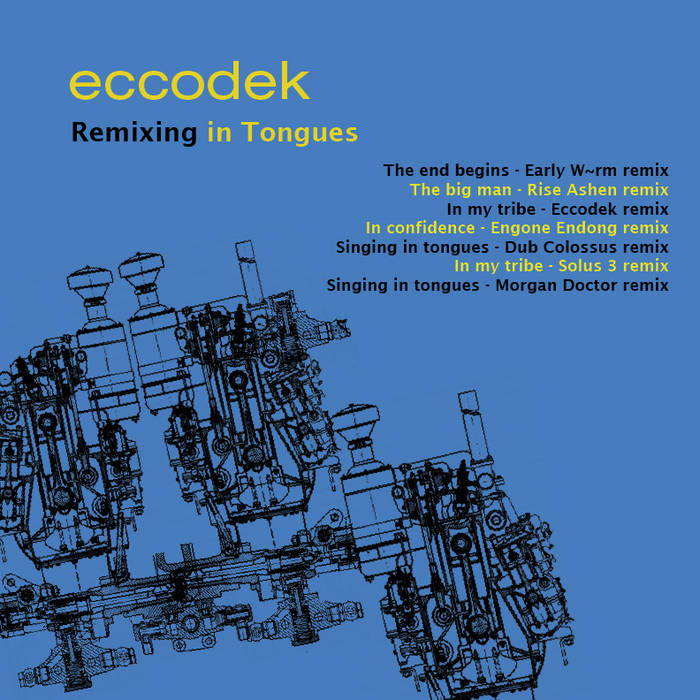 Canadian dub geniuses Eccodek return with another headspinning collection of remixes, letting loose some of the scene’s most innovative producers to reinterpret their award winning 2014 release Singing in Tongues.

Reimagining the Afro-South Asian smorgasbord of the original album, Remixing in Tongues sees both familiar and fresh faces on the producer scene taking Eccodek’s forward thinking globalism into vibrant and uncharted waters.

There is the deliciously dubwise, future-sound of Canadian producer earlyW~rm, whose take on "The End Begins" feels like it was cooked up in Lee Scratch Perry’s Black Ark studio, with Mad Professor making baked beans in the tape room.

Out of the UK, Real World Records artist Dub Colossus bring their dreamy, cinematic Ethiopia-infused bass and space sonics to "Singing in Tongues," while fellow Brit Solus 3 (of Transglobal Underground fame) puts a brick on the gas pedal, cranking up the BPM’s on "In My Tribe" and tripping out the original Malian tribalism. Meanwhile, Eccodek’s take on "In my tribe" goes straight for the funk, bass and synth heavy, served up Phat.

Wunderkind drummer/composer Morgan Doctor, who's featured on "Permission to speak," the closing track on Singing in Tongues, shows up here with an epic remix of the title track that builds like a musical tsunami, climaxing over cascading, melodic guitars and spectral production.

And lastly, fresh-faced Montreal-based West African Engone Endong kicks up a party with his jaunty, groove-is-in-the-heart take on "In confidence," morphing the original vibe into a straight up party crasher.

Produced by Andrew McPherson at The Monastereo, Guelph, Ontario, Canada

Released in the US in partnership with Black Swan Sounds